The main role of the ROS 2 Jettty handler is to:

The handler is implemented as a single RO2 node called jetty, its work flow is demonstrated in the following schema:

Since the sensor data is continuously streamed from Arduino to ROS over JETTY, a single threading node is not fast enough to capture sensor data and to communicate with the ROS network at the same time. We need, therefore, a multi-threading solution.

The node consists of two principle threads. One thread - the main thread- handles the communication with the ROS network while the other one - the reception thread - is dedicated to sensor data reading from JETTY.

The reception thread takes care of all tasks related to JETTY such as frame reading, decoding, processing and logging. There is no solution for queuing incoming sensor data, the thread keeps only the latest read data. Note that the raw IMU sensor data will processed by an IMU filter before being published. The detail of this filter is presented in sub section.

The decoded sensor data from the reception thread will be published to the ROS network by the main thread, this thread publishes four topics: 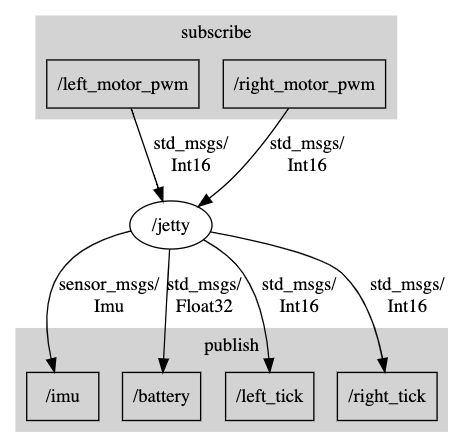 In additional to the published topics, in order to receive commands from the ROS network, the node also subscribes to the two topics: left_motor_pwm and right_motor_pwm, as shown in the figure above. These topics allow to control the two motors speed and direction from other nodes. From each message received from these topics, the main thread creates the command frame, encodes it and sends to the Arduino via JETTY for low level control.

The implementation of JETTY handler on ROS 2 is a part of the jarvis_core package that can be found in ~/workspace/ros2/src/jarvis_core/jarvis_core/jettty.py

Build the jarvis_core package with colcon:

The node can be run via the following command:

TODO display data and control motor via the command line